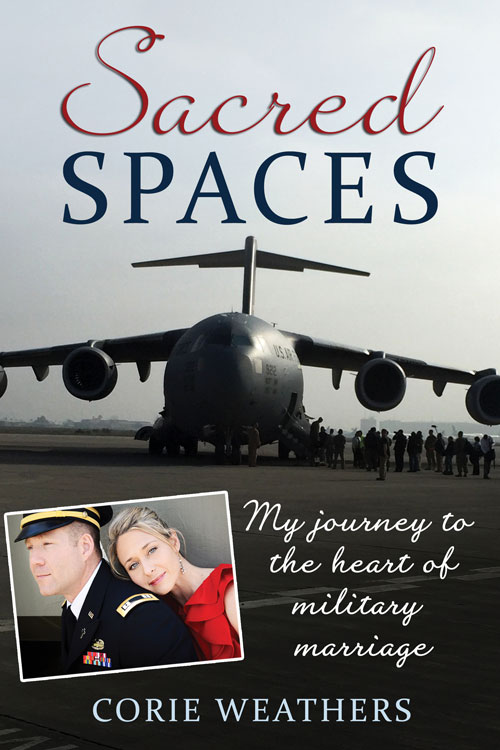 (St. Paul, MN)—Award-winning independent publisher Elva Resa Publishing is pleased to announce the August 1, 2016 release of Sacred Spaces: My Journey to the Heart of Military Marriage, a poignant memoir by 2015 Armed Forces Insurance Military Spouse of the Year Corie Weathers about the journey that changed her perspective of deployment and her military marriage.

Like many military couples, Corie and her husband, Matt, an Army chaplain, accumulated significant unshared moments during Matt’s deployments. Matt lost friends and fellow soldiers to combat in Afghanistan. On the home front, Corie supported fellow military families and walked through dark days with new widows as a friend and professional counselor. When Matt returned, he and Corie began using the term “sacred spaces” for these and other significant moments they had experienced independently. After multiple deployments, sacred spaces were taking up a lot of emotional room in their relationship.

“I love being a military spouse and all the joys of community it has brought into our lives,” says Corie. “I was not prepared, however, for the difficulty that would come from extended separations from my husband and the impact of his witnessing the ugliness of war.”

She adds, “Deployments changed us both. Surviving some moments during Matt’s absence took every bit of courage, grit, and independence I could muster, and he had no way to understand my experiences at home. He had placed his friends’ remains in body bags, and there was no way I could understand that. Calling these events sacred spaces was a way of saying, ‘Enter this space carefully.’ Unfortunately, it seemed we had accumulated more unshared sacred spaces than we knew what to do with.”

When US Secretary of Defense Ashton Carter invited Corie, as spouse of the year and an advocate for military marriages, to join his team on a one-week overseas holiday trip, she eagerly accepted, aiming to gain a better understanding of service members’ experience in a way that could be translated to other military spouses.

Corie didn’t choose the timing or circumstances of her trip with Secretary Carter—Christmastime, in the midst of her family’s second cross-state move in six months—but it seemed the perfect opportunity for Corie and Matt to gain a better understanding of each other’s perspectives.

Matt experienced life on the home front with new eyes as he moved their household belongings, prepared for the holidays, and settled their two young sons into their new school.

At US military installations in Turkey, Iraq, Afghanistan, and two aircraft carriers in the Persian Gulf, Corie spoke with military families stationed overseas and deployed troops on the ground, in the air, and at sea. Strategically paying close attention to her own sensory and emotional reactions to these new environments, she recorded her thoughts via video journal, blog, and podcast, and shared her impressions each day with military families over social media. She also wrote about the trip for Military Spouse magazine.

While she wanted to inform other military families about her discoveries, Corie deeply hoped the trip would impact her own marriage.

“There was no way I could go back in time and experience these moments with my husband,” she says. “Yet on this trip, I could see it, smell it, and feel the plane as it moved. I could try to better understand, and perhaps that was what was most important.”

Corie didn’t choose the locations the entourage would visit, yet fate landed her in the very place that had changed the trajectory of her life.

“Death had a ripple effect in my life and in our community during our deployments, and I was standing as close as I would ever get to where the pebble fell,” she says. “Like a thief, Afghanistan had taken pieces of Matt and didn’t give them back to him, me, or our family. This was the place. I was about to see the mountains of Afghanistan with my own eyes.”

As Corie sat in the belly of a C-17, where her husband had said goodbye to the remains of friends and fellow soldiers, as she touched with her own hands the memorial at FOB Fenty that displayed the names of soldiers Matt served as chaplain, and as she reflected on her grief as a care team member following the battle of COP Keating, Corie realized this journey was about much more than the push-pull of duty away from loved ones.

This was a journey to the heart of her marriage, a place where she would have to leave behind her resentment in exchange for ground she and her husband had surrendered to hurt, misunderstanding, loss—and to Afghanistan.

Corie set out on this trip hoping to gain a better understanding of her husband and his deployment experience, but along the way, she discovered a whole new perspective of herself and her military marriage. By sharing her story, Corie hopes to help other military couples strengthen their marriages.

“Before, I thought there would never be a way for me to understand Matt’s sacred spaces. By maneuvering around them, without realizing it, I had stopped trying to understand him,” Corie says. “This journey helped me realize it’s not about having fewer sacred spaces and it’s certainly not about avoiding them. We can’t change what has happened, but we can counterbalance the unshared moments with a greater number of shared sacred spaces we experience together.”

About the Author
Corie Weathers is a military wife, licensed professional counselor (LPC), sought after speaker, and consultant. Certified to work with post-traumatic stress from the Center for Deployment Psychology, she has a passion for serving military and first responder families.

Corie was awarded the 2015 Armed Forces Insurance Military Spouse of the Year (MSOY) by Military Spouse magazine. As MSOY, she advocated for mental health issues and served as a media correspondent writing for online and print publications and speaking to groups on topics such as PTSD, grief, marriage, and military family culture.

Corie and her husband Matthew, an Army chaplain, have worked to support service members and families involved with the Global War on Terrorism. Corie and Matt cohost marriage retreats and offer a free online marriage program (Enliven Marriage) designed to improve intimacy and connection.

About her book, Corie says, “I hope sharing our vulnerable story will encourage other military couples to start a dialogue about pursuing a stronger relationship, try to understand one another’s separate experiences, and commit to creating more opportunities for shared sacred spaces.”

Sacred Spaces: My Journey to the Heart of Military Marriage will be released August 1, 2016 and is available for preorder at MilitaryFamilyBooks.com.

ELVA RESA PUBLISHING LLC is an independent publisher based in St. Paul, Minnesota, whose mission is to make a positive difference in people’s lives. Its primary imprint specializes in books for and about military families. ElvaResa.com

MEDIA: Please contact Elva Resa PR at 651-357-8770 or pr@elvaresa.com to arrange an interview with the author or receive review copies of the book.