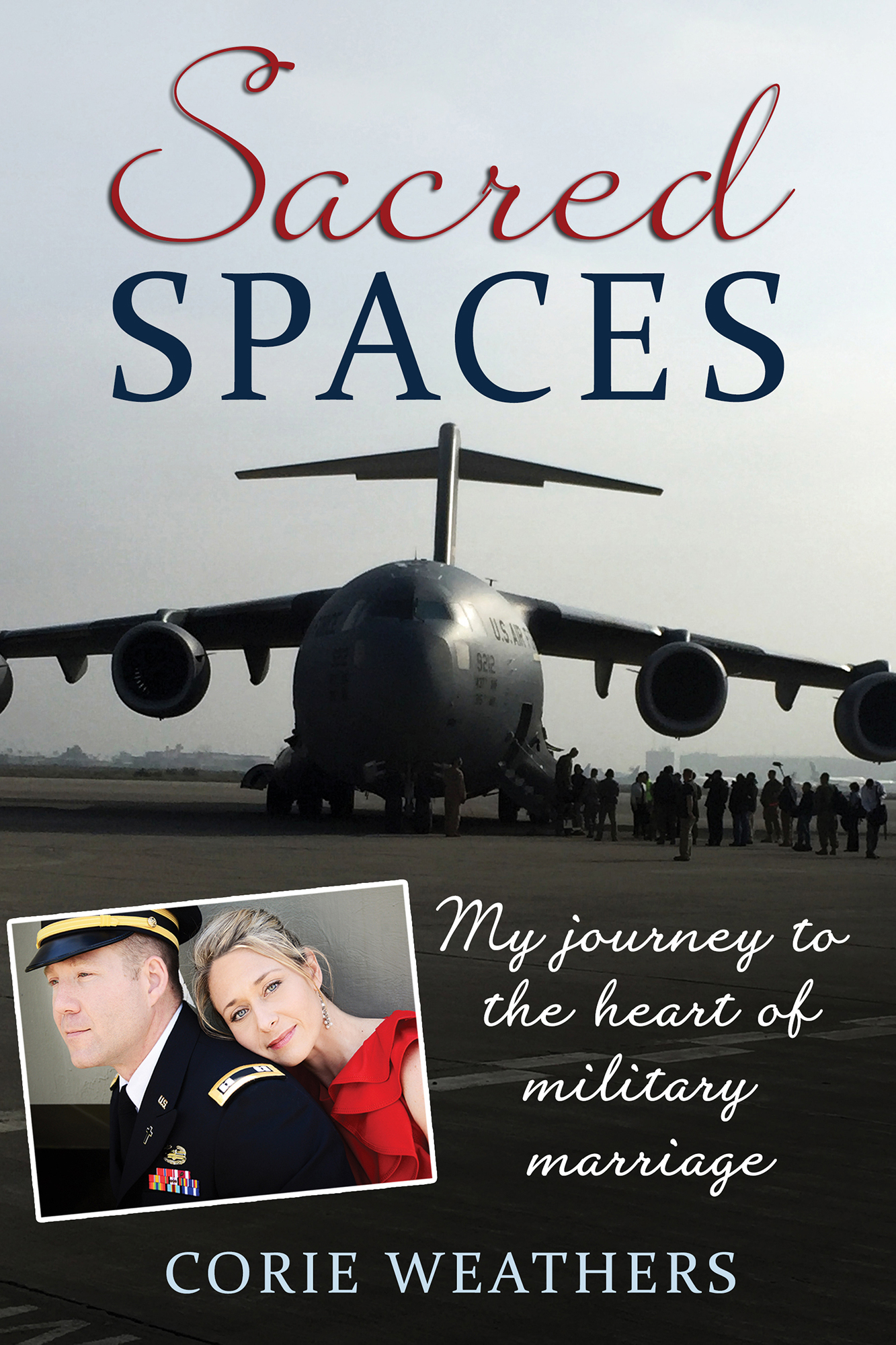 Sacred Spaces: My Journey to the Heart of Military Marriage by Corie Weathers is the vulnerable story of the journey that changed Corie’s perspective of deployment, herself, and her military marriage.

Like many military couples, Corie and her husband, Matt, an Army chaplain, accumulated significant unshared moments during Matt’s deployments. Matt lost friends and fellow soldiers to combat in Afghanistan. On the home front, Corie sat with bereaved military families and walked through dark days with new widows as a friend and professional counselor. When Matt returned, he and Corie began using the term “sacred spaces” for these and other significant moments they had experienced independently. After multiple deployments, sacred spaces were taking up a lot of emotional room in their relationship.

When US Secretary of Defense Ashton Carter invited Corie, as the 2015 Armed Forces Insurance Military Spouse of the Year, to join his team on a one-week overseas holiday trip, she eagerly accepted, hoping to gain a better understanding of her husband’s deployment experience and lessen the impact sacred spaces had on her marriage.

Corie didn’t choose the timing or circumstances of her trip with Secretary Carter—Christmastime, in the midst of her family’s second cross-state move in six months—but it seemed the perfect opportunity for Corie and Matt to gain a better understanding of each other’s perspectives.

Matt experienced life on the home front with new eyes as he moved their household belongings, prepared for the holidays, and settled their two young sons into their new school.

At US military installations and aboard aircraft and aircraft carriers in Turkey, Iraq, Afghanistan, and the Persian Gulf, Corie spoke with military families stationed overseas and deployed troops on the ground, in the air, and at sea. She paid close attention to her own sensory and emotional reactions to these new environments and recorded her thoughts each day via video log, blog, and social media. She also wrote about the trip for Military Spouse magazine.

While she wanted to inform other military families about her discoveries, Corie deeply hoped the trip would impact her own marriage as well. She didn’t choose the locations the entourage would visit, yet fate landed her in the very place that had changed the trajectory of her life.

As Corie sat in the belly of a C-17, where her husband had said goodbye to the remains of friends and fellow soldiers, as she touched with her own hands the memorial at FOB Fenty and reflected on her grief as a care team member following the battle of COP Keating, Corie realized this journey was about much more than the push-pull of duty away from loved ones.

This was a journey to the heart of her marriage, a place where she would have to leave behind her resentment in exchange for ground she and her husband had surrendered to hurt, misunderstanding, loss—and to Afghanistan.

Corie set out on this trip hoping to gain a better understanding of her husband and his deployment experience, but along the way, she discovered a whole new perspective of herself and her military marriage.

By sharing her story, Corie hopes to help other military and first-responder couples strengthen their marriages. Join her Sacred Spaces Campaign.

About the Trip that inspired the book

Corie Weathers is the author of Sacred Spaces: My Journey to the Heart of Military Marriage. As a licensed professional counselor, Corie works with military and first responder couples to build stronger relationships. She hosts the Lifegiver Military Spouse Podcast and leads marriage retreats with her husband Matthew, an Army chaplain.

“Sacred Spaces is a window into the soul of patriotic commitment. Your heart will break and heal with every turn of the page.”
—Taya Kyle, The New York Times bestselling author of American Wife and executive director of the Chris Kyle Frog Foundation

“In this book, Corie shares insights we can bring into our own hearts to see our own relationships with new eyes.”
—Amy Bushatz, Editor, SpouseBUZZ

“Sacred Spaces by Corie Weathers is a must-read for all military spouses!”

“Each of us has our own sacred space around life-changing events that occurred during that deployment and after.”
—Tammy Romesha, wife of Medal of Honor Recipient SSG Clinton Romesha