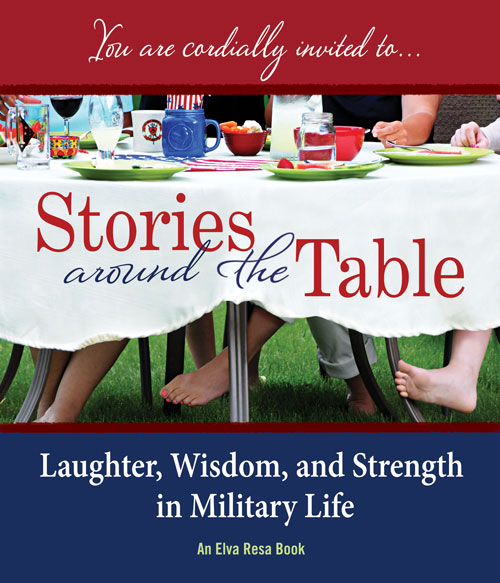 (St. Paul, MN)—Award-winning independent publisher Elva Resa Publishing is pleased to announce the October 2014 release of Stories Around the Table: Laughter, Wisdom, and Strength in Military Life, a collection of personal stories from more than forty military family writers, including spouses, parents, children, and service members.

From poignant to practical, tragic to humorous, these candid conversations shed heartfelt insight on many aspects of military life. Some subjects, such as deployment, reunion, combat injury, post-traumatic stress, and frequent moves, specifically reflect the military lifestyle. Writers also explore topics common to both military and civilian families, including marriage, education, parenting, friendship, faith, finances, depression, infertility, and grief, and how military life influences the experience.

The inspiration for the book came from a phone call Elva Resa author and publisher Karen Pavlicin-Fragnito received from a young military spouse who was facing several military life challenges. “We sent her a variety of books and suggested community resources,” says Pavlicin-Fragnito, a former Marine spouse, “but I really wanted to invite that young woman to my kitchen table, to have lunch or coffee or dessert with a handful of other military spouses who understand her life.”

At a spouse summit sponsored by Military.com in April 2013, Pavlicin-Fragnito spent two days gathered around tables, listening to military spouses recount stories and lessons learned from around the world. Many of those spouses regularly write or talk about their experiences on social media, in published books and columns, at workshops, or on the radio. “I wanted to invite them all to have lunch with that young spouse—and with other military families, new and seasoned—to laugh, cry, lend insight, and tell stories,” she says. “A book seemed like a great venue for a gathering of that scope.” The first person at the summit she invited to the literary table was Stars and Stripes columnist Terri Barnes.

Barnes not only contributed a story, she managed the project and edited the compilation for Elva Resa. “Nearly everyone we invited enthusiastically agreed to participate,” says Barnes. “These authors transparently shared wisdom from their lives, gained through tragedy, trial and error, and both everyday and extraordinary circumstances.”

In addition, all authors agreed to forgo a royalty, making it possible to donate a portion of the proceeds from the sale of the book to nonprofits that serve military families. A primary nonprofit beneficiary will be announced on October 14 at the National Press Club in Washington, DC.

“Terri and I have both encountered many military families in need of support and friendship over the years, but neither of us has a kitchen table big enough or mobile enough to serve military families all over the world,” says Pavlicin-Fragnito. “Stories Around the Table is our way of recreating that experience of a conversation with friends in book form, so military family members in even the most remote locations can enjoy a seat at this table. Sharing the proceeds allows us to also support military families who need help beyond what a table of friends or a book can provide.”

Contributing writer Sara Horn says, “As military spouses, we can convince ourselves that we have to be able to do everything on our own, but I don’t think that’s true. We have God, and we have each other. I’m excited about this book of stories from so many wonderful writers; it’s a tangible reminder we can hold in our hands and, as we read, realize other people have felt the same way or have gone through similar experiences. We can gather around our virtual table.”

Stories Around the Table will be released October 1 and is available at MilitaryFamilyBooks.com and other retailers. Please visit StoriesAroundTheTable.com for more information, including a full list of authors, with links to bios, and the Menu (table of contents).

ELVA RESA PUBLISHING LLC is an independent publisher based in St. Paul, Minnesota, whose mission is to make a positive difference in people’s lives. Its primary imprint specializes in books for and about military families.  www.ElvaResa.com, www.MilitaryFamilyBooks.com

MEDIA:
***Select authors are available October 12-15 in Washington, DC, at the Association of the United States Army (AUSA) annual meeting and on October 14 for the first “Stories Around YOUR Table” live event at the National Press Club. ***

Please contact Elva Resa PR at 651-357-8770 or pr@elvaresa.com for more information, to arrange an interview with an author, or to receive review copies of the book.