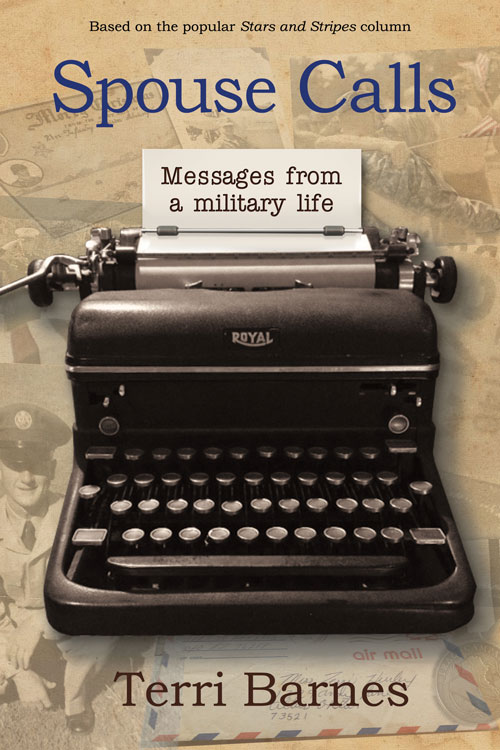 NEW BOOK RELEASE: Spouse Calls: Messages From a Military Life by Terri Barnes
A collection of the best military life columns by respected journalist Terri Barnes, based on her popular weekly Spouse Calls column in Stars and Stripes.

From her own kitchen table to Capitol Hill, Terri takes readers beyond the headlines and homecoming videos for an inside look at the day-to-day hardships, victories, and many ways military life shapes, challenges, and enriches its families.

Terri says, “Military life touches the consciousness of our nation mostly through events that are heroic, scandalous, or tragic. However, the quieter days, when no one is watching, are more indicative of our lives than big news events. Much of military life is noteworthy without being newsworthy.”

In both her column and her book, Terri reports and reflects on a wide range of topics, including motherhood, faith, friendship, family ties, war, current events, sacrifice, PTSD, moving, homecomings, and more. As a wife and mom, Terri highlights important, pivotal moments in her own family’s life as well as others’, in essays that will resonate with both military and nonmilitary families.

“Many of the issues military families face are the same ones every American family faces, just in a different setting—a different setting every two or three years, in fact,” says Terri. “Moving colors our lives and complicates our marriages, parenting, and relationships with extended families. Moving and deployment are not military families’ only topics of conversation, but they are the backdrop, the setting, the environment of our lives.”

About her book, Terri says, “My hometown isn’t a geographical location, but a place in American culture that is invisible to many people. My family lives in the hometown of military installations and military communities. This book is the story of the people we know and the life we live in the neighborhood of our American military life.”

About the Author:
Terri Barnes is the creator of Spouse Calls, a weekly Stars and Stripes column about military life, in print and online since 2007. She has been a member of the Washington, DC, press corps and has contributed to several other books about military life. Her work has appeared in Air Force/Army/Navy Times, The Huffington Post, Books Make a Difference, and other newspapers, magazines, and base publications worldwide.

Terri’s expertise in military life comes from long experience. Her father was a Vietnam veteran and career military man. She married her Air Force husband, Mark, in 1985. They have three children, Will, Jessie, and Wesley, born in military hospitals in Texas, Guam, and Arizona, respectively.

ELVA RESA PUBLISHING LLC is an independent publisher based in St. Paul, Minnesota, whose mission is to make a positive difference in people’s lives. Its primary imprint specializes in books for and about military families.  www.ElvaResa.com, www.MilitaryFamilyBooks.com