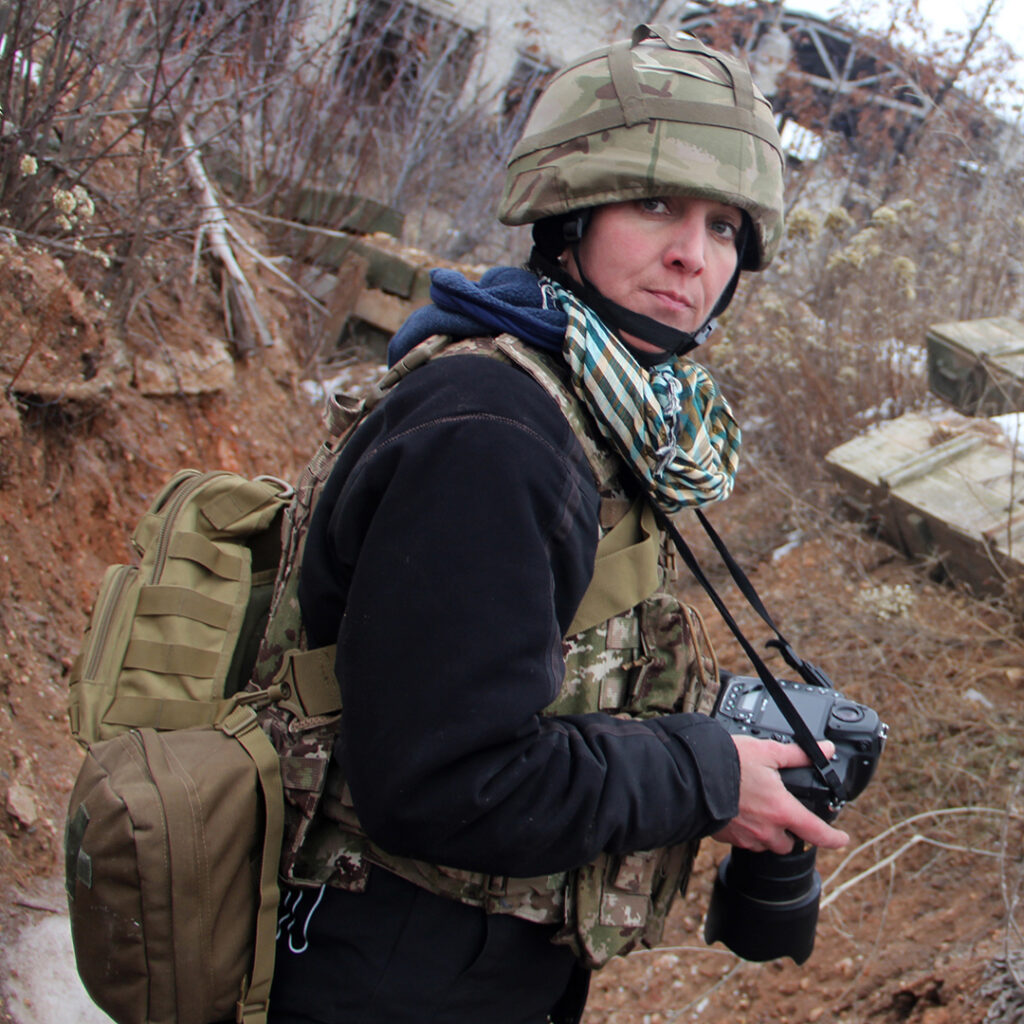 Jenn Tuero (JT) Blatty is a photojournalist and the author of Snapshots Sent Home (Elva Resa, 2023), a military memoir.

Like many post-9/11 combat veterans, JT struggled to regain her sense of purpose in the first years returning home. Then a chance meeting with a former West Point classmate in 2018 changed her trajectory. He was taking part in an International Summit in Ukraine to help develop the Ministry of Veterans Affairs and invited JT to tag along. As a documentary photojournalist, JT was immediately drawn by the familiarity of war and those who serve in wars.

As she embedded with Ukrainian volunteer soldiers to document their stories, JT became inspired by these self-deployed, ordinary people fighting for their beliefs and freedom, and found herself becoming part of their community. Her story began to blend with theirs in a universal bond of combat veterans, transcending the boundaries of nation and conflict.

“After stepping foot inside Ukraine for the first time, my life entered an entirely different frequency,” says JT. “I literally sold my house, rented a cheap, built out shipping container to live in for the quick trips back to the United States, and fell into a community of combat veterans in Ukraine. I found the universality that I speak of in my memoir. I’ve lived this story with them.”

JT graduated from the United States Military Academy at West Point in 2000 and served six years as an active-duty US Army officer, deploying with the first troops into Afghanistan following 9/11 and again into Iraq during Operation Iraqi Freedom. After completing her US military service, she pursued freelance photography and writing as a career, working as a regular contributor for Connect Savannah Magazine and New Orleans Advocate and a FEMA disaster reservist photographer following an internship with National Geographic Traveler.

Since early 2018, she has been documenting the conflict in eastern Ukraine, while creating a photographic/audio archive of the 2014 volunteer soldiers of the Donbas, capturing oral history and portraits on the front line in bunkers and forests, and in Kyiv flats. Her Frontline/Peace Life exhibit shares the stories of the revolutionaries who self-deployed during the original Russian insurgency and saved Ukraine’s independence. The collection exhibited in Chicago and New York City in 2019-2020, and was scheduled to open March 2022 in Kyiv before the current war with Russia.

JT attended the 2018 Writeaway in Tuscany, on a full scholarship sponsored by Elva Resa, Books Make a Difference magazine, and Writeaways, where she began to incorporate her Ukraine experience into her writing. She received a 2021-2022 Ukraine Fulbright scholarship to finish Snapshots Sent Home, while continuing her photojournalistic work in the Donbas.